On Fri, Aug 18, 2017, Deb and I took an evening Jet Express boat cruise from Port Clinton to around West Sister Island. It was a fundraiser for the Friends of Ottawa National Wildlife Refuge. Tom Bartlett helped to narrate the cruise with info about birds on the island. Food and adult beverages were provided on the boat. Good time.

I went on the island twice with the Black Swamp Bird Observatory, back around 2010 and 2011, helping the banders by using a ladder to climb small trees and snagging young birds from their nests, mainly Black-crowned Night Herons, and passing them down to the banders on the ground. When the banders were done, they passed the birds back up to me, and I placed them back in their nests. It's an amazing experience.

The island is nicknamed Vomit Island because the young birds and adult birds vomit and/or crap on us as a means of self defense. The island smells funky when landing on its shore, but after a while, I no longer noticed the smell.

We would stay busy for at least three hours. Then we ate lunch on the rocky beach. And then we boated back to the mainland. I suppose around others, we would seem a bit ripe from the "stuff" that rained down on us while on the island.

During my two banding visits to the island, when we approached the island, the sight of the many birds flying around and the remoteness of the location made it hard to believe that, technically, we were still in Ohio.

While on the island, I used a compass and a grid map to help us navigate the dense foliage on the small island. Different bird species nested in different habitat on the island.

It's an experience worth experiencing at least once.

On Aug 18, 2017 while waiting at the dock for our Jet Express boat, we saw two White Pelicans fly over, south of us. The birds flew northeast to the southwest. That was a surprise sighting for me for August. We see the White Pelicans pass through northwest Ohio in April and May. Apparently this summer, a pair of White Pelicans successfully nested on a western Lake Erie island in Canadian waters. 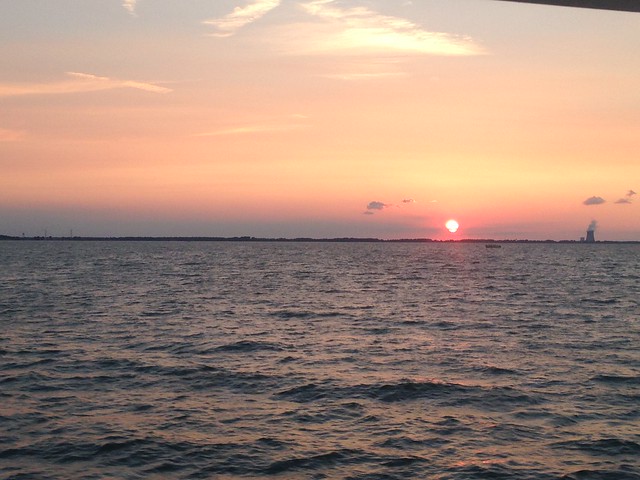