Metroparks of the Toledo Area is leading a private-public initiative to get a bike-share program in the city’s urban core that would begin with 100 bicycles and 17 docking stations.

The park district is applying for a grant to receive federal money through the Toledo Metropolitan Area Council of Governments to fund about 80 percent of the bike-share program’s estimated $330,000 startup cost.

The Downtown Toledo Improvement District and the Toledo Area Regional Transit Authority would share in maintaining the bikes and inventory and administration of the program. Ongoing costs to operate the bike share would come through user fees and private sector memberships, he said.

A user at ToledoTalk.com wrote:

"And for those of you that view Bicycles as a nuisance, legally they are entitled to a full lane."

Based upon my cycling days in the 90s, many automobile drivers don't care about that law that allows bicyclists to use the full lane of a road. And you know who definitely disobeys that law? Dogs. At least outside the city.

Unless it was a quiet road, I didn't bicycle in the middle of the lane. I hugged the right edge. I didn't want to give Neanderthal automobile drivers any more ammo to be irritated. Didn't matter. I still had things thrown at me, and some drivers intentionally drove as close as possible to me.

Within the city, cyclists need to remember that they must obey the laws of the road like automobile drivers, such as stopping at red lights and stop signs.

As much as I would like to bicycle around Toledo especially from West Toledo to downtown, I don't think that I have the nerve today.

A serious distraction exists for automobile drivers today that did not exist in the 90s, at least not to the degree that it exists today. Of course, that's drivers using their cell phones.

From walking my dog around our neighborhood, I'm amazed at the number of drivers who slalom through the side streets with their heads down, viewing their phones. I never trust drivers to stop at stop signs. And some don't, blasting through intersections, zombied by their phones.

Maybe people drive distracted only on small, neighborhood side streets, and they drive focused on the main arteries.

If I wanted to bicycle from the DeVeaux area, located at Sylvania Ave and Douglas Rd, to say Uptown in downtown Toledo, what would be my route? Sylvania Ave, Berdan Ave, Monroe St. I'm guessing that I would stair-step my way to downtown by using a lot of itty–bitty side streets, despite my observation above.

I still think that bicycling as a means of transportation has been slow to be accepted in Toledo because Toledo is historically an automobile manufacturing town, which is fine. People enjoy their well-engineered vehicles.

With all of the road construction that has occurred on Toledo's major arteries since 2000, how many miles of bike lanes were added?

The bike sharing idea in Toledo is good. I'm glad that many people are interested in bicycling. I'll let these pioneers pave the way, hopefully not with their faces, to make bicycling more accepted in Toledo. I'll sit on the sidelines and wait a few more years. I'll continue to use walking as my alternate means of transportation.

Side note: Over the past couple years, I've noticed an increase in the number of people using what looks like motorized bicycles. It's an old design. These bicycles contain a small, noisy engine. I think that the rider has the option to switch from using the engine and pedaling or the engine assists with pedaling . I've seen people zip along at a good clip. I wonder if these are DIY hacked bicycles, or if they are bought that way. And do they require a license to operate?

I have a road bicycle. If I were to ride regularly around Toledo, I might purchase a hybrid bike or something with slightly wider and more durable tires.

I like this Detroit-made, three-speed commuter bicycle from Detroit Bikes. 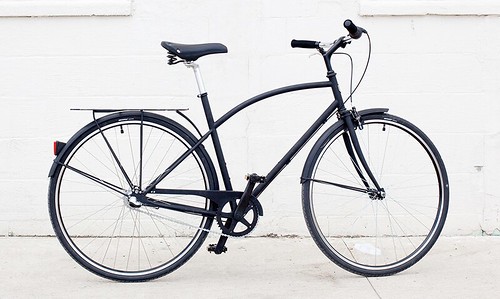 From the Blade article:

The Metroparks’ proposed bike share is modeled after a similar program in Dayton that began in May, 2014. That city’s bike share, called Link ...

Detroit Bikes will assemble 3,000 Motivate bikes in its 50,000 square-foot factory in Detroit. The manufacturer will also build wheels and oversee local partners to paint frames and forks.

Motivate operates the largest bike share systems in the country and nearly 70% of the entire bike-share fleet in the U.S.

Carrying forward with this success in bike-share partnerships, Detroit Bikes is thrilled to announce a subsequent partnership with CycleHop, the nation’s fastest growing bike-share provider, to bid on the recently announced City of Detroit bike-share RFP.

If the Metroparks patterns Toledo's bike share program after Dayton, then I assume that Toledo will use BCycle.

Detroit Bikes may or will produce bicycles for Motivate and CycleHop.

It might have been kind of cool if Toledo's bike share bicycles were made in the Motor City.