The title implies that the Blogosphere vanished, but I don't believe that happened. Since about 2008, the Blogosphere got pushed down the popularity list by the giant social media platforms.

A so-called return to the blogosphere would still lag behind the silos, but any growth in personal website publishing is a positive.

This does not mean that people will end their social media usage. IndieWeb concepts give users the best of both worlds: personal web publishing and interacting with social media.

The main point of the IndieWeb is this.

The IndieWeb is about owning your domain, using it as your primary identity to publish on your own site (optionally syndicate elsewhere), and owning your data.

Recently, I saw this Twitter thread via my micro.blog timeline. Reading Mark Boulton's Twitter page, I found another of his threads.

Making a concerted to revive my blog reading habit. It died in about 2009. Twitter killed it, but I can still feel a feint pulse. With that said, I am totally out of the loop on RSS readers, decent blogs (are there any still?), etc. Recommendations of all the things, please!

Seems like it's a time of blogging renewal. I like it. And yes, I'm redesigning mine as I'm writing this. Quite enjoying making things again even if I'm tying myself in knots with all kinds of new things.

Still debating with myself on whether or not to include comments on my new blog. Currently thinking: 'yes'. Old Skool. Thoughts? Are comments even useful/relevant anymore? (Yes, I know we had this debate in 2008 and Twitter won).

A response at miklb.com that I saw in my micro.blog timeline today.

Other tweets about the debate over blog comments.

I bet we might be hungry for real debate in comments now. We aren't having those conversations on Twitter anymore. We miss them. Webmentions is cool, but requiring people to blog in order to comment adds friction. We moved to Twitter because it reduced friction.

She uses the word "friction" where I would use the word "barrier".

I think we want some friction back - having built Technorati to connect blog responses the first time round, it did become a spam fighting problem then.

Yes, the social media giants made creating, consuming, finding, and sharing content easier than blogging software and platforms that existed from the late 1990s to the mid-aught years. The bloggers of yesteryear might disagree that those functions were harder, but for less technically inclined users, or for people who want to use the web differently, the silos provided better solutions.

But ease-of-use and lower barriers (less friction) can also lead to more problems with trolls, flamers, and spammers. Sometimes, good design is making something harder that benefits the determined.

Requiring people to create blog posts that are meant to be replies to other blog posts is a good barrier that could lead to more thoughtful writing and more useful discussions.

"Barries to Entry" improve the signal over noise. More barriers annoy the trolls and spammers.

As the creator and maintainer of a small, local message board for 15 years, I learned that more barriers created better discussions. It might have reduced the number of comments and users, but the thread quality improved. And the message board felt more like an online community with inside jokes and lingo, offline gatherings, and most importantly, helpful discussions.

At the beginning of the 2000s, I read a book titled Design for Community by Derek Powazek. The book contained a section or a chapter on barriers to entry. I read the book before I started Toledo Talk. It took me some years, however, to find the right combination of barriers to use. It's not perfect at day one.

The barriers don't eliminate the trolls and spammers, but the destroyers may get irritated and move on to easier targets.

The barriers will not hinder the people who are interested in holding meaningful online discussions and building an online community. Less but better. Quality over quantity.

The quantity may occur organically over time as more people discover or rediscover personal web publishing and cross-site commenting and join the blogosphere or whatever it's called. This is where the IndieWeb's Webmention can help tremendously. And it might be the perfect time for micro.blog.

Sometimes, things come together at the right time that lead to positive change. Personal web publishing and using feed readers will hopefully increase and garner more attention in 2018.

Barriers, however, will prevent the dreaded on-boarding and growing to scale that funded startups desire. But this is not about a silo or a centralized service.

This is more about decentralization like email. People can read and respond to blog posts, using different software and services, but the different systems use open standards, such as Webmention.

Regarding comments, the lo-fi approach can still work.

More on the subject of personal publishing from this Jan 8, 2018 blog post by IndieWeb supporter Ben Werdmuller, titled Changing how I post in 2018.

This year, I'm moving back to blogging on a regular basis. I've been blogging since 1998, but sadly not in a consistent place, and over the last few years I've let Twitter take more of a focus.

If you use a feed reader (I'm a paid user of Newsblur), you can follow my posts by subscribing to https://werd.io/feed.

I'm writing this on public transport, and this will also encourage me to keep improving my own mobile posting experience.

And finally, comments are off - so if you disagree with what I write about, you'll need to post your replies on Twitter or on your own site. I'll see them.

I know that RSS gets criticized because it's based upon XML, but RSS is sturdy. It has existed for over 15 years. It's still widely used. I like the IndieWeb's h-entry/h-feed idea, but it seems that RSS has longevity. RSS and Atom feeds were important to the decentralized, blogging social network that existed in the early and mid aught years.

Back around 2002, I read a small book titled, The Weblog Handbook, written by Rebecca Blood. The book was published in 2002.

I read the Weblog Handbook again in 2016 and 2017, marking it up heavily with a ballpoint pen, underlining and circling passages and writing notes in the margin. 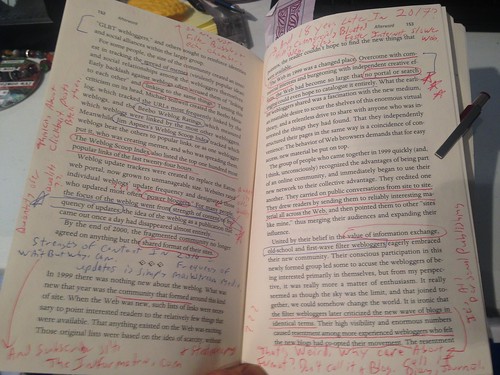 It's fascinating to compare Rebecca's thoughts and the state of the blogosphere from back around 2000 with how people use social media today. The book contains information that's useful today for personal web publishers.

Rebecca wrote that by 2000 or 2001, too many blogs existed to follow. Rebecca discussed information overload. In 2001. Funny.

The somewhat related links below contain a few of my thoughts over the years in no particular order. Some of my opinions and web usage have probably changed at least a little.

It's odd that I would write about the blogosphere when I state on my about page, "This is not a Blog".

If people create content on their own websites that use their own domain names, then I don't care how those authors display their content, nor do I care how the owners describe their sites.

I like the E/N description. My h-feed sidefile shows recent posts, ordered by youngest to oldest. But I don't want my homepage to be generated automatically that conforms to someone else's definition.

Yesterday, I reread the 2012 craigmod.com post, titled Subcompact Publishing. That post mentioned Marco's publishing foray called The Magazine that he launched back in 2012. That was a great idea. Later, Marco sold it, and then unfortunately, that owner wound up shutting it down. I always liked the article layout of The Magazine in the iPad app and on its website. That's why I made this page look this way. My Wren web publishing code lets me add custom CSS to any page.

In 2017, I read a few articles about the growing popularity of the printed zine. I bought a few local printed zines in 2017. Two days ago while eating lunch at the wonderful Original Sub Shop & Deli, located near downtown Toledo, I bought the Fall 2017 issue of the local zine Khroma. It's published like a small booklet with poetry, essays, and artwork. This issue contained 40 pages. When closed, the zine size is approximately 8 inches by 5 inches. It's produced quarterly in Toledo. Content is created by many people.

I've thought about creating an individual print zine, but the group zine would be more fun and less stressful to produce. And creating a localized version of Marco's The Magazine might work too. It would focus on local authors who write mainly about local issues. It would be "published" every two weeks with each issue containing only a handful of articles, like The Magazine.

That diverges from the open web of amateur bloggers, but maybe some people would enjoy paying for a digital and/or printed product that's produced regularly and features writings from local writers of all kinds. This would depend upon Toledo having a solid blogging network, which we did back in the aught years.