Excerpts from a comment posted at this Toledo Talk thread, about The Andersons closing its retail stores in the spring of 2017.

National trends do eventually make their way to Toledo :-) If I were undertaking the bread search today, as opposed to 2010, I'm sure the grocery folks would have a better level of understanding about unnecessary chemical additives, crust characteristics, etc. Back then, most of them looked at me like I was a Gwyneth-Paltrow-level food crank.

While I like the Uptown Funk sourdough loaf bread produced by All Crumbs Bakery that I buy at the Toledo farmers market, I'm not aware of anyone around here producing bread at the level of Zingerman's in Ann Arbor and Avalon Breads in Detroit.

I have not tried the Erie Bread Bakery in Monroe. [We visited this tiny bakery and store in March 2017, and we enjoyed the bread and sandwiches. Cool place. Good food.]

We currently receive two breads in the mail each month via the Zingerman's bread club that someone gifted to us.

I tried the bread at the Fresh Market when that place first opened, and their bread was inferior.

Check the ingredients. Unless it's a specialty bread, "real" bread only has three ingredients: flour, water, and salt. The sourdough starter consists of flour and water. Olive oil might be listed not because it was included in the recipe but because the fermentation container may have been lightly lined with olive oil.

At one time, a person at Sautter's Markets in Sylvania baked good breads because he was either trained at Zingerman's or he took a class at Zingerman's. I don't know if that type of bread baking continues at Sautter's.

The Andersons used to sell a variety of Zingerman's breads. So did Churchill's and Kazmaier's. But in 2008, Zingerman's stopped delivering to the Toledo market. That's when I decided to learn how to make my own bread.

The simple, no-knead method that uses a tiny bit of instant yeast will produce bread that's probably better than anything that you can buy around here. You'll need a five-quart, cast iron dutch oven.

In January 2010, I took the eight-hour, naturally leavened bread baking class at Zingerman's. If you are fine with eating mediocre to acceptable bread, then don't take that class. It will change your view of bread.

My sourdough starter began in the class, and it will be seven-years-old at the end of this month. I "feed" this pet every week. I should have created a twitter account for my starter.

Earth to Oven Bakery, located in Sylvania, sells Zingerman's breads. That's because they go to Ann Arbor to get the bread a couple days a week. They sell their remaining Zingerman's breads at the Toledo farmers market.

Today, it's far easier to find high quality beer and quality roasted coffee beans in the Toledo area than it is to find high quality bread. Brewing beer at home will produce excellent beer, but I can drink tasty beers at the local breweries too. Roasting coffee beans at home can produce an amazing cup of java, but I'm also satisfied with buying beans from one of the many local roasters.

But for top-notch bread, I have to make it myself. And like most good things, the process takes a lot of time, which is why I don't make bread often. These are my attempts to replicate Zingerman's Farm and French Mountain breads. 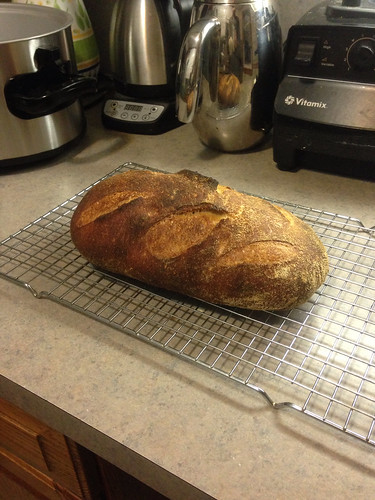 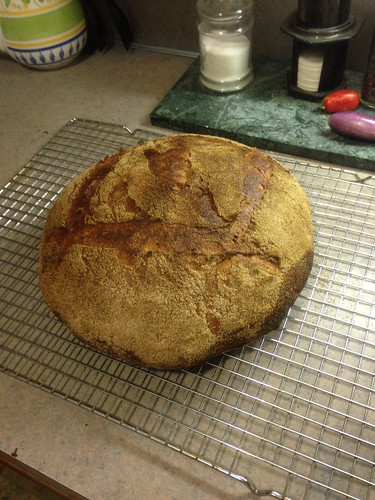 The darker brown the crust, the better the flavor due to the caramelization of the natural sugars that exist in the grains.

If you order bread at Zingerman's over the phone for either mail delivery or pick-up at their bakery, located at the south side of I-94 off of State St, you can specify how dark you want the crust. They will bake your bread longer if you request it.

Only a few ingredients are required to produce bread and beer. But time is an important factor. No shortcuts. Nobody needs to know the science behind both processes when making those items, but the chemistry and biology are interesting. And from my observations, those who do know the science, produce better products.

If someone in the Toledo area is producing bread that's similar to Zingerman's 2-kilo French Mountain Bread, I would be greatly interested in knowing that info.

Despite whatever improvements that have occurred in the Toledo area, regarding bread, I still think that an opportunity exists for a smaller version of Avalon Breads to exist in Toledo that would sell at its own store and to restaurants, etc.

Many bread bakeries produce a wide variety of breads and other items. That's fine for bakeries that have existed for a long time where products are added AFTER the bakery has perfected their existing products.

But one of the most famous bread bakeries in the world, among bread nerds, is Poilane in Paris. That bakery only makes four types of breads. And they don't make the baguette because the founder didn't consider the baguette a real french bread. Poilane's signature big wheel of bread is delicious. I admire that simplicity, quality, and fanaticism.

If you are interested in increasing your breaducation, I recommend the following books:

Of course, classes at Zingerman's are always good. And I've found this website useful for info and products: http://breadtopia.com.