I'm talking about dragonflies and not Bessie, the Lake Erie monster.

And by lakeshore, I'm referring to the Lake Erie shoreline, located a little east of Toledo, specifically Metzger Marsh and Magee Marsh, but any nearby shoreline areas may attract migrating dragonflies in the fall.

"Ode" or "odes" refers to odonata.

Odonata is an order of carnivorous insects, encompassing the dragonflies (Anisoptera) and the damselflies (Zygoptera). The Odonata form a clade, which has existed since the Triassic.

The southwest winds may slow the fall songbird migration along the lake shore, but it enables good viewing of some migrant dragons.

I was able to get within a couple inches of one Red Saddlebags that perched on a twig.

Here are two of my photos of the female Red Saddlebags, taken at the Magee Marsh east beach trail on Sep 24, 2010. 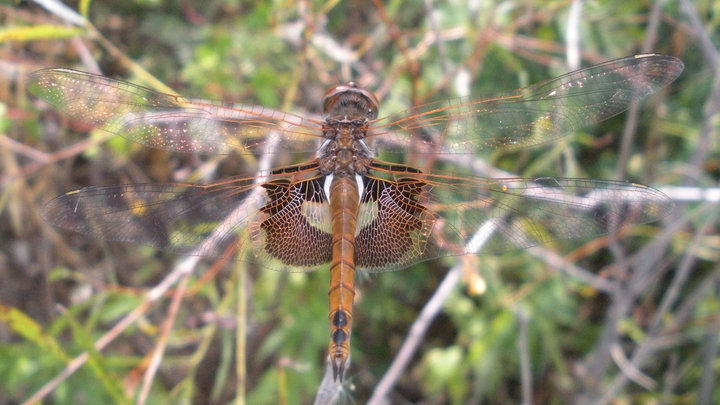 The winds were shifting, which should improve the songbird viewing on the Magee Marsh boardwalk this weekend and diminish the ode activity on the beaches. But drive carefully. Northern Leopard Frogs are crossing the causeway.

Like birds, some dragonflies migrate, including the Common Green Darner and Black Saddlebags dragonflies. These two common species of dragonflies can be found in our area during the summer, but they can occur in larger numbers during the fall migration, especially along the lake shore.

The Red Saddlebags dragonfly, however, is primarily found in the Central U.S. from Illinois down to Texas and some places further west. It's an uncommon to rare late summer or fall migrant or wanderer to Ohio, especially during strong, southwest windy weather. The best place to see a Red Saddlebags is probably along the lake shore. The water acts as a barrier.

Sep 24, 2010 was a very windy day with strong southwest winds, and thus a good day to visit the beaches and marshes for oddball dragons. At the Magee Marsh east beach trail, I saw two Red Saddlebags that day, and it was a new sighting for me.

On Oct 27, 2010, strong south winds caused me to play a little afternoon hooky and visit Metzger Marsh with the hope of seeing a Striper. Fortunately for me, the Toledo dragonfly guru was at Metzger too, and after a while, we got to see what we had hoped to find. Two Striped Saddlebags wandered around the Metzger parking lot that's located near the pier. Neither dragonfly perched low enough for a good photo, but one hovered and moved low and slow, and it provided great close looks. This was my first sighting of a Striped Saddlebags.

The most common dragonfly to see in the Toledo area right now and through most of November is the smallish Autumn Meadowhawk, which is known for its hardiness.

It's nearly impossible to run out of exciting discoveries when observing nature. And the Toledo area, from the Oak Openings Region through the many urban and suburban parks to the southwest Lake Erie marshes, provides abundant opportunities for personal nature discovery. The ongoing challenge is in the studying and learning with the hope to identify nearly everything that occurs in our area. It's an unobtainable goal, but the exercise is fun.

The red saddlebags hasn’t ever been officially declared a migratory species, however.

That's bizarre, in my opinion.